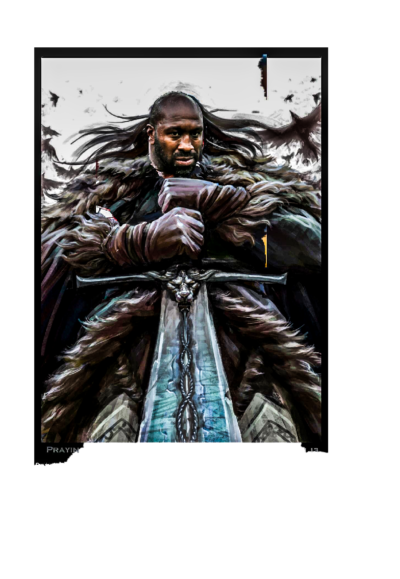 You may be wondering why I chose to make my “Purpose” player, the Club Captain?

The answer is very simple, without such a player on your side you will struggle to achieve Premiership Health. I believe, above all else, having a purpose in life is the key to your health and happiness.

Every team, every player, even every cell and gene in your body has a specific purpose it needs to fulfil, and when you’re not playing on purpose, you’re risking unhappiness, discontentment and relegation to a less meaningful life.

When most people think about football captains, I’m sure Bobby Moore is right at the top of their list. However, as a diehard Albion fan, it is another Moore who takes pride of place, Darren Moore, or, as we like to call him “Big Dave,” because of his resemblance to a character in a pot noodle advert!

Big Dave knew early on exactly what he wanted in life:

“By the time I got to 9 or 10 years of age my head was full of football. A love of the game was instilled in me from a very early age, and all I wanted to be was a professional footballer.”

He just didn’t know how or where, and at the age of only 16 he was in the last chance saloon of his football career after being released by Walsall FC.

During the next 9 years he would travel up and down the country, from Torquay to Doncaster, Bradford to Portsmouth, in pursuit of his dream, before finally ending up at the “shrine” of the Hawthorns.

He was present at the club during their most important seasons of the modern era; the first promotion to the premier league in 2002, and the “great escape” of 2005.

Throughout his footballing career and life “Big Dave” had a purpose and a faith.

His work for the “Faith and Football” charity played an important part in his own personal development. Just 10 days after the the final game of the 2005 season, “Big Dave” was in China, walking the Great Wall to raise money for his chosen charity;

“to try and help children who’ve had a difficult start in life. We use football to touch people in this country because everybody can relate to the game.”

It wasn’t all fun and games, a cruciate ligament injury kept him out of action for 9 long months, many players would become depressed by such a lengthy spell on the sidelines, not “Big Dave,” he kept the faith and realised he had a purpose:

“I believe that such experiences mould you as a person, and I turned this one into a positive. We are taught to count such a test and trial as a joy and my time in physiotherapy was a joyous period.”

A man mountain of a player, a colossus of a man, he is currently playing his biggest ever part at the club, as an inspirational caretaker manager, leading the team into battle against insurmountable odds.

We all need to find our own Captain Purpose in life, to enable our team to play well.

Without Purpose, your team will ultimately lack direction and your players will lack motivation.

You’ve simply got to have a reason to get out of bed in the morning if you want to keep on playing at a Premiership Health level, and although you may never fully understand the game itself, if you can retire knowing you have left it in a slightly better position than when you first started, you’ve done your job well.

We all have different beliefs, different ways of doing, as well as seeing, and the key to Premiership Health, is that you make your own prayer, your own songs that connect you to whatever you believe in, to give your team spirit and purpose and ultimately a successful and happy life.